Yesterday I took part in a d.school pop-out class called Exponential Ideation, with Elysa Fenenbock and Aithan Shapira, and it was chock-full of activities and prompts that I plan to steal shamelessly for Building Bridges. In fact, I would almost describe it as a (six-hour marathon) BB workshop for adults. At an art gallery! Today’s focus was on brainstorming as someone else (and reflecting on what that felt like), empathy as a form of ideation, translating ideas across media and industries, and changing constraints through unusual pairings. Here’s a run-down of what we did today, in case you find it as useful as I did. A note, though – I haven’t edited this post for readability, just used it as a brain dump for future use, so I apologise if it’s hard to get through. I hope the emphases and spacing and pictures help! Also, did you know that massaging your face can make your brain feel better?

We started with an exercise called empathy sculpt. Clusters of objects arranged as a still life were grouped on the table, and we were given clay (and five minutes) to sculpt what we saw in front of us. Aithan and Elysa guided us through a number of prompts (each took two minutes).  First,theye urged us to sculpt “the most perfect” version of what we were seeing, to look at relationships between objects, to put all our effort into it – and then in two minutes, we all had to move one chair down, take a look at someone else’s starting-sculpture…and then continue it for them. Then we moved back to our seat, thought about what we’d learned from trying to work on someone else’s work, and then wrote down on a little post-it single words that would be prompts for what we learned. Then we moved two down to the right, and were given the prompt of trying to a 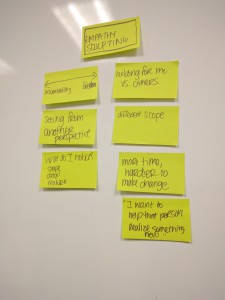 dd to the sculpture based on how we thought the original person would approach it, based on their existing sculpture and post-it note guide. Then we moved one further down, and were told to work on this sculpture as if we were “fixing” it, making it so much better than it actually was. Finally, we sat down in front of “our” sculptures one last time, adding in any  final pieces based on all the things we learned.

There’s so much richness to this exercise – seeing how incomplete a picture we all have of an object/project/event (and how we fill in what we don’t see and assume we can see it all), appreciating that there is an art to looking, how often “team” projects can simply become the aggressive “fixing” of other people’s work, how hard it is to really get into someone’s head, and how you can’t “unsee” different perspectives and how that seeps into your work. Someone talked about how differently they began to see, and someone else described what she wanted to do as “helping others see differently.” Everyone approached their work so differently – some with painstaking attention to detail, some more concerned with relationships between objects, one almost 2D versions of the objects, another almost-abstracted negative space. So much space for meaty discussions about empathy for others through an entirely tactile exercise. 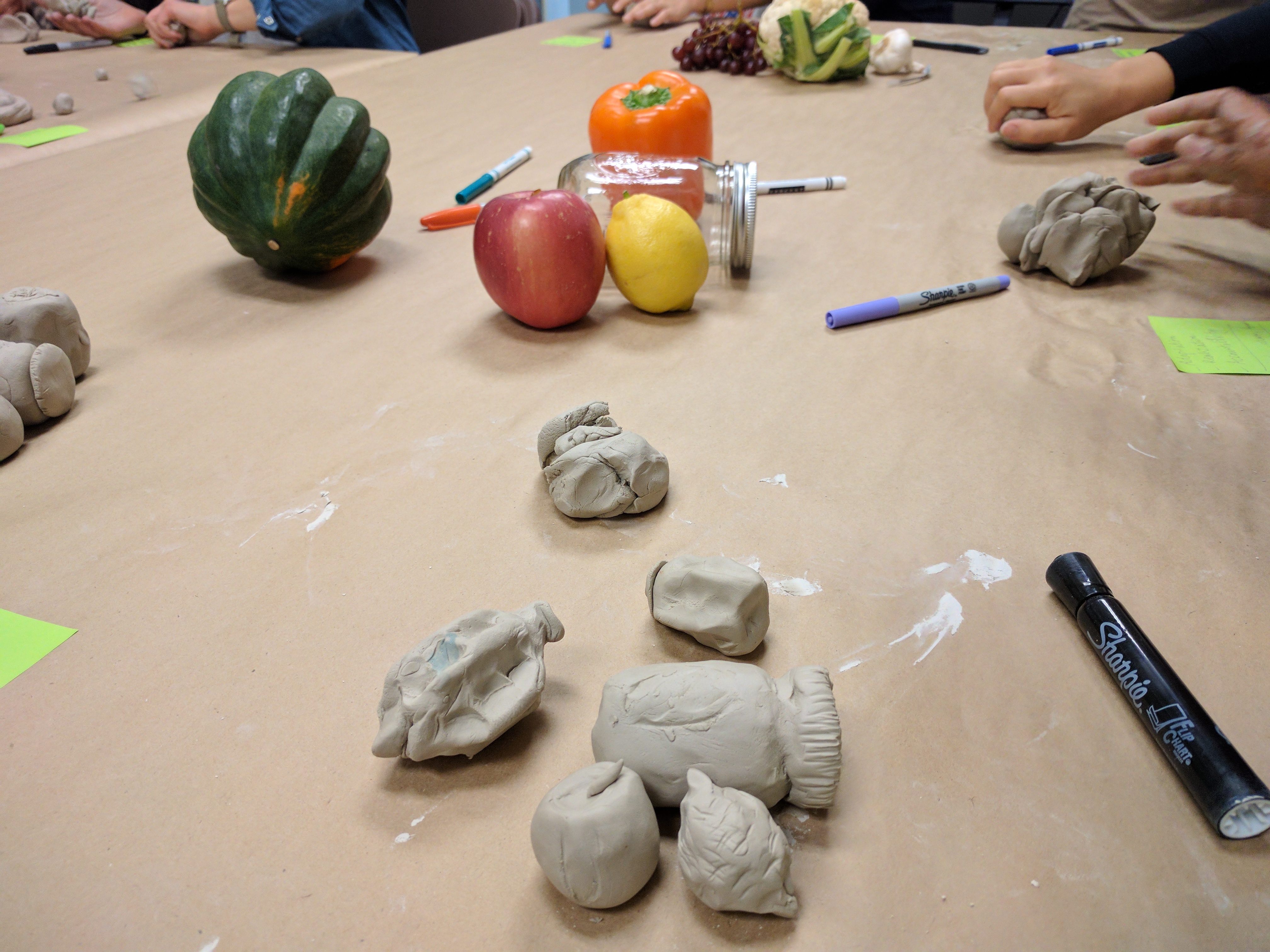 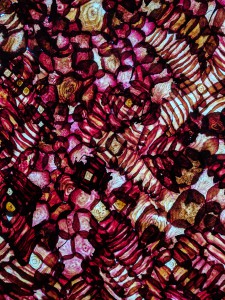 The next exercise was the chance to wander through the ICA’s gallery space for 15 minutes, pick a piece (or an artist) on view, and really try to get in their head. I picked Julia Anne Goodman’s Unearthed (from Nov 13, 2016 – my birthday!) where she used thinly sliced beets to depict San Jose’s rising winter constellations. It was a fabulously tactile work. We took notes based on biographies and didactics and the piece itself, and it really made me think about the work and its production in a way that I wasn’t used to.

Then, we were given a bunch of objects that we had to “re-create” in some way as though we were the artist that we picked – a wine-opener, a lemon squeezer, a mason jar – but it didn’t need to be recreating the object itself; it could even be something associated with it. We just had to immerse ourselves in what we thought was their way of making. I picked the mason jar, and made the following out of green and yellow pipe-cleaners (first time I’ve used pipe-cleaners in a way I felt creative about) as a way to think about the process of pickling. If I’d had more than five minutes I think I would have made a TON. An overwhelming furry pipecleaner-rug of pickles. 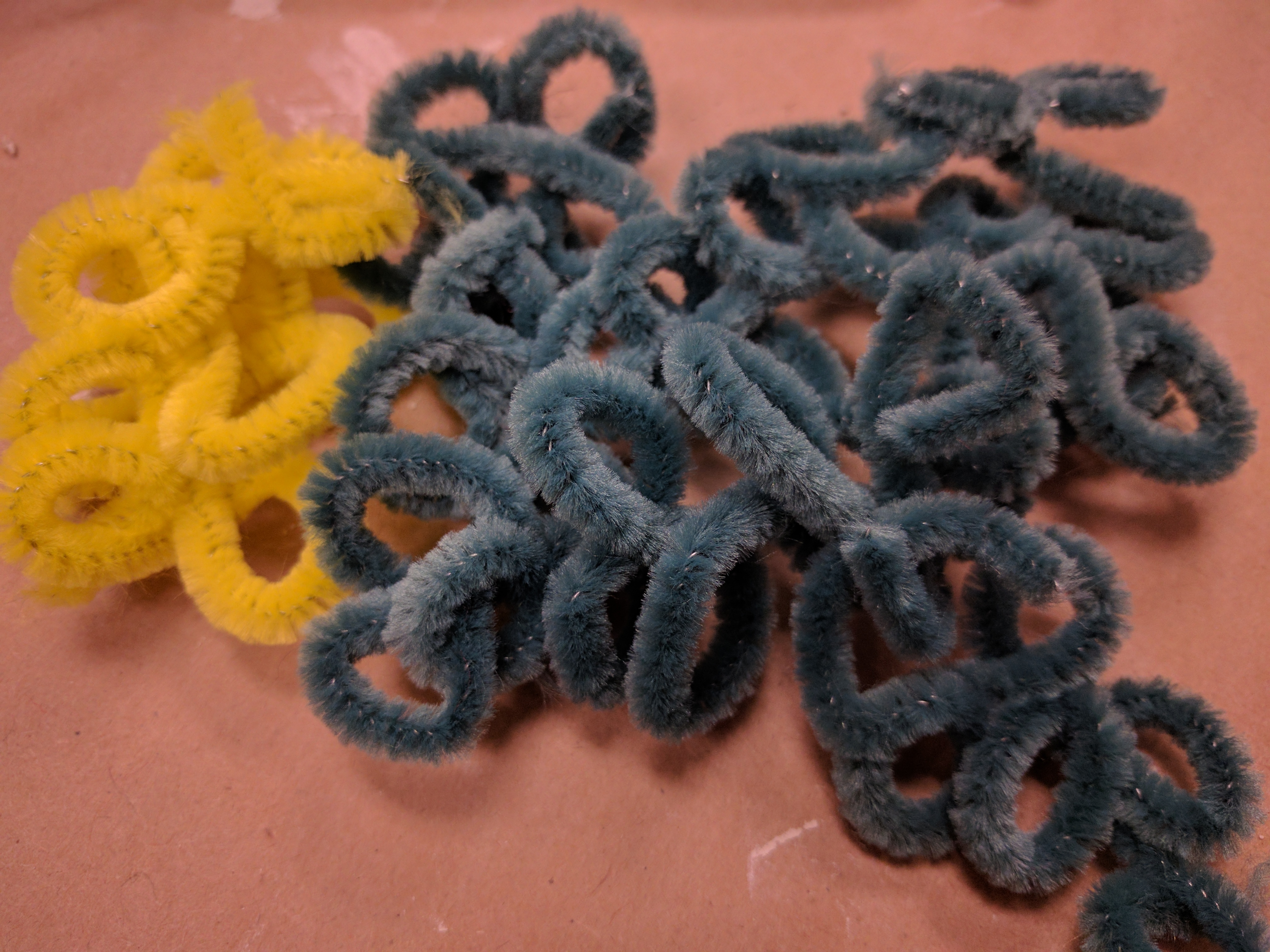 This exercise was fabulous, but also weirded me out in that I got completely in the zone acting how I felt JAG would go about her work, so I wasn’t an artist making an object, but an actor being an artist making an object. It always blows me away just how versatile the medium of acting is (even though I know it is and that’s why I love it so much), and how much better it pairs with the visual arts than I’ve been imagining in my conceptualisations of the BB syllabus.

Elysa and Aithan are working on food-related projects, so their next prompt was, “If you were X company, how might you design the food experience of the future?” The companies were Apple, Facebook, Gap, Bank of America, and I think there was another one but I’m blanking. We were given Gap, and using their values of classic, dependable, affordable clothes for all, we thought they might come up with an urban kitchen in food deserts that did a lot of educating around how to mix and match classic local produce in healthy, nourishing ways. As soon as we were done, I wished we had named it Closing the Gap, because I love bad puns. Not a super outlandish or brilliant idea (at least not as outlandish as Apple was) but definitely a useful exercise in trying to think of new ideas, by pretending to be someone you’d think would have no stake in that idea, or has an analogous problems (Elysa gave the example of observing how NASCAR responds to situations that need lightning-fast response to bring solutions to the ER at a hospital, which included a “kit” that had pre-packed tools for the 10 most likely situations). Perhaps also useful for working through innovative approaches to some of our logistical, administrative, and financial concerns! It also helps to put in some false constraints to get your brain working in weird ways. It’s a way of disrupting (bing! buzzword alert!) ourselves by taking on a new persona. By engaging in mini-challenges that seem off-topic, or using media and topics that no one is familiar with, you break through people’s expectations of how they will engage. 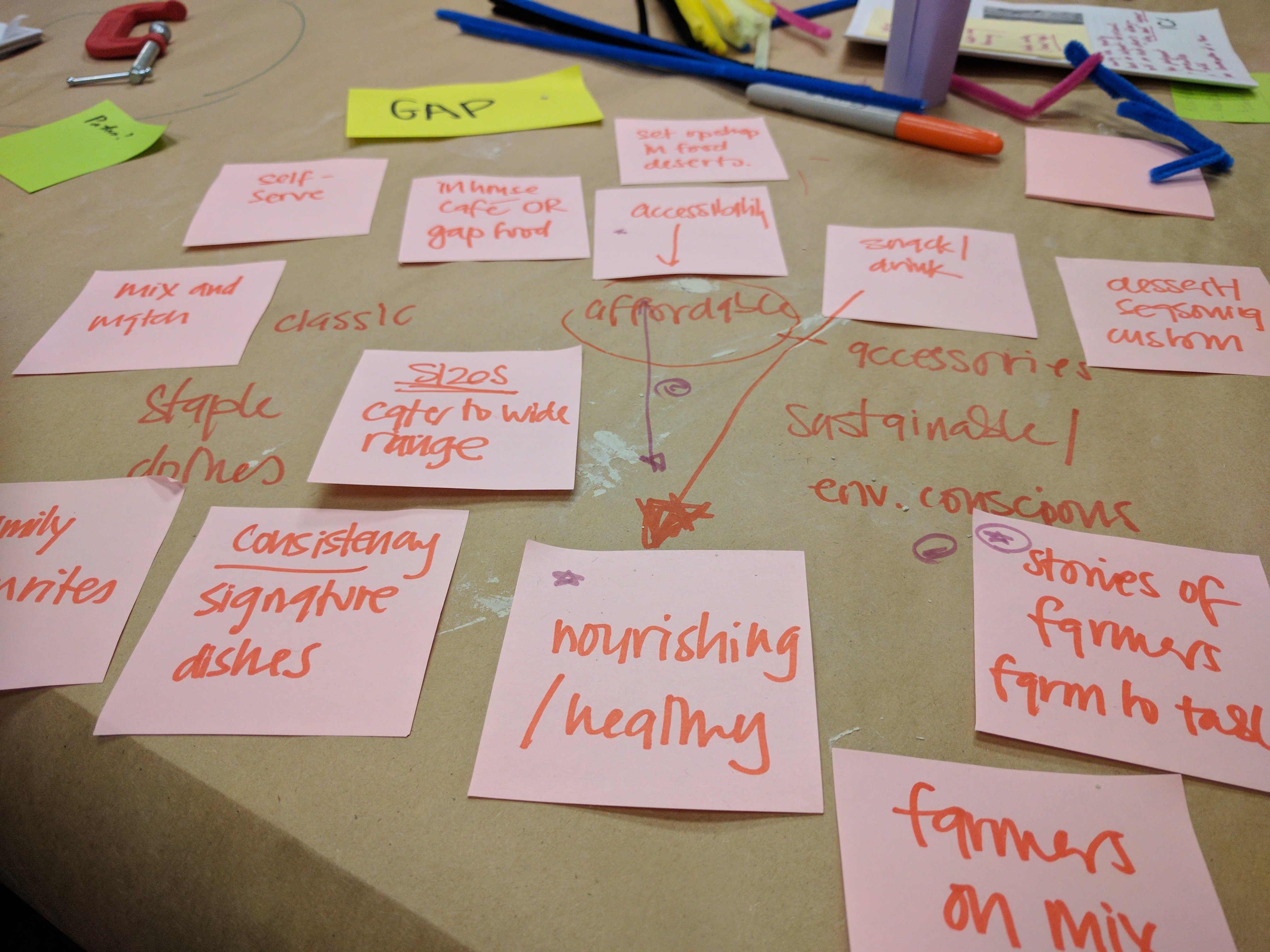 A second version of that exercise was to come up with as many ideas as we could in a short period of time in response to the prompt, “How might you respond to creating a food-on-the-go solution?” I think our first set of ideas included drones, personalized robot chefs, and train vending machines. We were then told to come up with a list of foods you can have for lunch (one minute) and things you can find at Target (one minute). We then created ridiculous mash-ups, pairings of food + Target-object. We had mochi-bubble wrap, beer adhesive tape, and more. 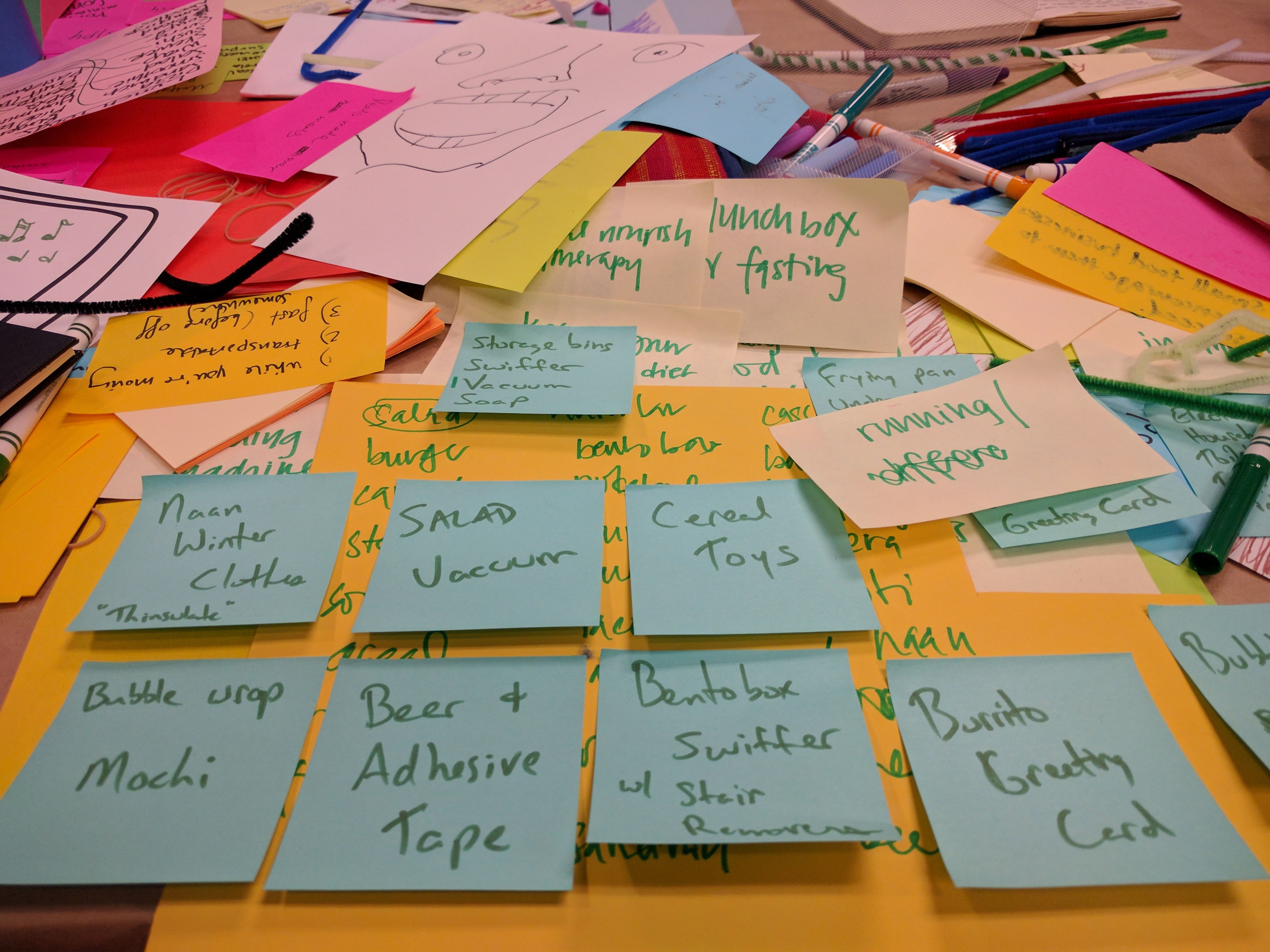 We then created a one-minute advertisement for “burrito greeting card” as a first draft prototype (again, I’m always a fan of skits as prototypes). It was ridiculous, and I think we kind of forgot the original prompt of food-on-the-go in our fixation on getting our brown-paper burrito to sing “Bailando” in children’s greeting card style (I just stuck my phone in) but we laughed so much that it didn’t matter. Also, now I really want mochi bubble wrap.

Also, the key to “choosing” ideas is not about picking one, or the “best” – you can make choosing a bit more focused by getting people to pick what they think will be most likely to delight the user, or is the most ambitious, and not throwing away the others, but maybe doing several quick rounds of prototyping on a bunch of different ideas. Perhaps a good way in for deciding what to pick as a “final” exhibition installation, to take the pressure off and get rid of those thoughts of, “What if we’d picked something else?”

The next exercise was fun as an architecture/art history student; we got back in the gallery space, and were asked to point to the first object we saw when we entered it, which prompted a whole conversation about curation: where objects are placed in relation to each other and in relation to our yes, about narratives through progression, and the way in which entering from one door over another completely changed a particular order. The way in which curators mediate between artist-story and viewer journey. How each piece is placed in a way that allows all the other pieces to be their best. A cheesy but captivating definition for curation, and one that we can certainly weave into conversation with young BB participants about ways of seeing.

Using what we’d discussed, we were then given one “object” – a form of chocolate – and a verb. We had to pick one more object from the museum, and a third object of our choosing, and “curate” it in such a way that our three objects could stand alone without verbal explanation to conjure up our word. 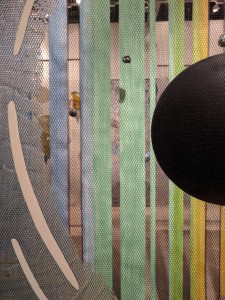 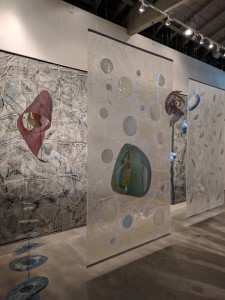 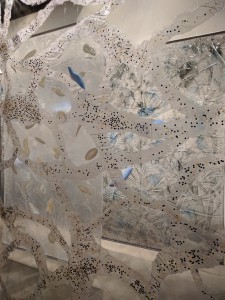 We got play, so we picked the picture of s’mores, and a wonderful multi-coloured hanging installation by Russell Crotty called Look Back in Time (see images above) that really invited exploration (and also really brought on the temptation to touch it!) and decided that our third “object” would be a table of stuff for making your own make believe. I know we could probably have pushed our concept a little further, but we were getting pretty tired at this point!

Lastly, we were asked the questions:

“Where are you stuck? What constraints can you change (scale, time, medium, company) to re-think your problem? How will you try to do this?”

I didn’t have a super answer to this – I thought a little card pack of “hats” (people you could pretend to be, like a teacher or beautician), “places” (that you could go for inspiration, like a supermarket or hospital) and “events” (to serve as the backbone of your ideation, like a boozy happy hour or birthday party) might make for a multi-dimensional getting-unstuck toolkit. I also really liked someone else’s idea of pulling together research questions she cared about with those of others, drawing two out of a hat, and then forcing herself to think those ideas through and seeing where that takes her – it might be a good one to shamelessly filch!